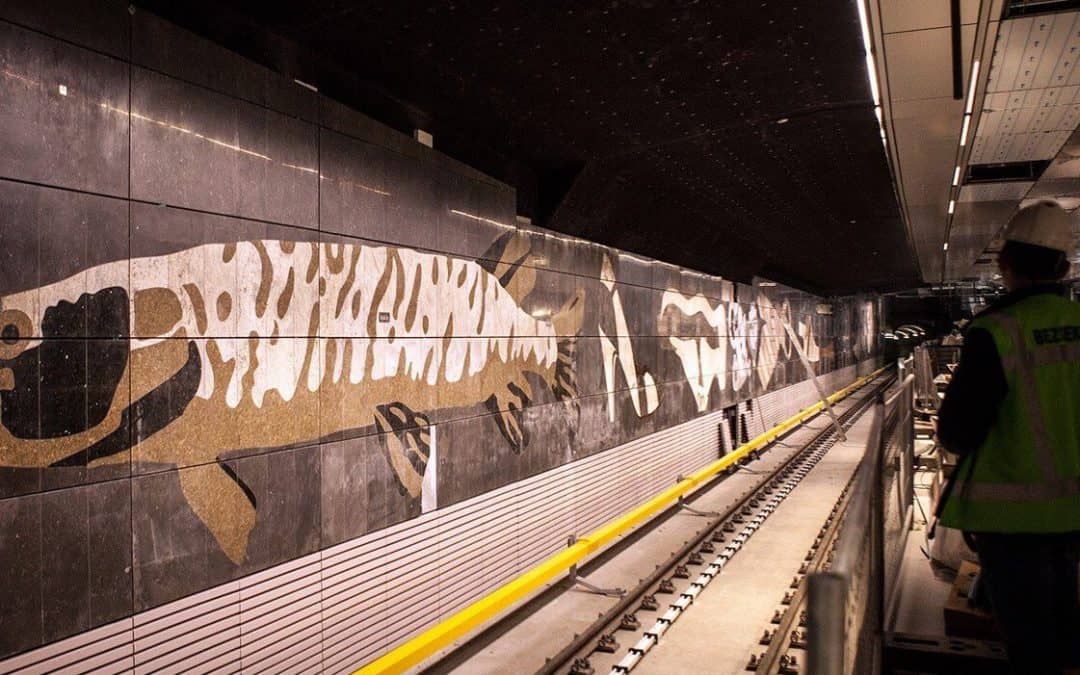 Amsterdam: a station in marble and natural stones:

October 2016, the two creators of this gigantic fresco are speechless, thanks to MDY their work has taken on a new dimension. In fact, until now Daniel and Grégory had only seen their creation in the form of a modeled mock-up and today it sits on the facade of the Rokin metro station in Amsterdam.

From conception to completion of the project, it took three years to design this natural stone fresco. Initially, the two artists developed the design of the mosaic. They decided to take inspiration from archaeological objects found during the construction of the station.

In Amsterdam, metro passengers had a funny surprise when they got off at Rokin station. A huge crocodile was waiting for them! Don’t panic, the latter is made of marble and natural stones. It is the MDY group, specialized in the shaping of marble, that is at the origin of this incredible project imagined by two artists: Daniel Dewar and Grégory Gicquel.

A fresco of various objects:

On the fresco, travelers discover objects and animals arranged randomly. On the facades of the station you will find a butterfly next to a flute and a pair of shoes. The purpose of this representation is to make the passengers react by surprising them. But the drawings each have their own little story, the crocodile represents the jaw found during excavations. As for the tie, it designates the workers who participated in this project.

The fresco is made up of several hundred natural stone plaques. The marble and natural stones come from Vietnam, they were shaped by MDY in their workshop located in Brittany.

Once the plates are made, they are numbered and sent to Amsterdam where a team of installers is dedicated to installing the plates.

Marble and natural stones bring extraordinary colors that bring life to the illustrations. Overall the colors are rather sober to create an atmosphere of serenity and calm in the face of these incredible designs. At Rokin station, each traveler creates their own story by looking at these various symbols.

For the revival of the Rokin station in downtown Amsterdam, the “sculptor” artists Grégory Gicquel and Daniel Dewar were selected to create the two frescoes. It is one of the 8 stations of the new north-south line, with a length of 190 m and platforms approximately 22 m deep. Its daily capacity is 57,500 passengers.